Tonight was the night to arrive in Leon, Nicaragua. Tonight it was better to forget about hollow responsibilities and to instead surrender to the finer things in life. It was the celebration of “La Griteria”, Mother Mary, the Virgin. Maybe I just really appreciate that it is all about “The Lady”. Maybe I am just looking for something bigger than myself. With so many things that leave a feeling hollow and empty, what do I want to believe in?

For the next two days, the people of Nicaragua will believe in La Griteria. They are celebrating Her miracles and all other things feminine and “purissima”. Generosity, consideration, sympathy, and gratitude.

I do not know about organized religion, but I do feel the power of ideals, community, and traditions. Come with me….

At noon today, there were seven minutes of uninterrupted fireworks. Preparations were underway. In case you don’t know the practical use of fireworks, other than the celebration of a nation’s independence, the sparkles and chimes are to gain the attention of Mother Mary herself. We can all imagine that she is very busy, the ultimate multi-tasker, and we must ask her to focus on Mother Earth for at least this one moment in time….so that we can give our thanks.

As darkness fell, hundreds of people gathered in El Parque Central. The grand exterior, peeling with the passage of time, was lit in white and bled with song. The anticipation thick in the streets did not go unanswered. 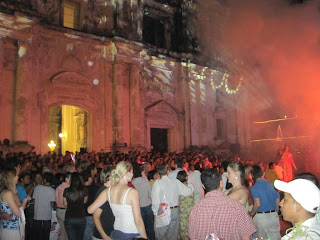 As if according to the celestial clock of Mary herself, the fireworks launched themselves throughout the city, over the cathedral, simultaneous with the six o’clock bell. I mean, these flashes and bursts were everywhere, small and unyielding, constant, unbelievable, even to themselves. Two men swung from ropes ringing the church bells, oscillating up and down like a cartoon animation. It was so loud, and it seemed endless, but how else can we communicate with Her on a night just like any other, according to Her grand scheme?

A man leaps in the air just outside of the cathedral, inside a wooden dragon (shaped more like a soap box derby race sled), which is upside down on his head, littered with sparklers and live firecrackers. The fires spew into the crowd, arousing squeals and yelps as actual flames land throughout the audience. This escapade lasts for more than thirty minutes, and the chaos of fire and flight creates a scene of almost comic benevolence. Everyone moves closer towards the light.

Ten more minutes of booming illumination, as the parade of patrons begins to wander, first to the alter just inside the cathedral, where Mary is surrounded by flowers, candles, and a musical rendition of the sort crossed between a carousel soundtrack and a toy store.  Mary has a giant, bloody heart above her golden crown.

The parade moves onward to home after building for the rest of the night – past two o’clock in the morning from what I’ve been told.  Imagine a Christian version of our more hedonistic celebration of Halloween.  Churches, general stores, private homes, sheds, and cyber-cafes have been decorated individually and together with similar themes and detailed variation.  Mother Mary is the star, surrounded by flowers, candles, and handmade adornments. 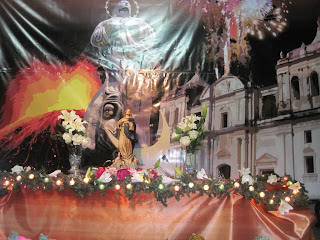 Children, the poor, loved ones, and community members charge the stations of “La Griteria”. They gritan – or yell – “Quien causa tanta alegria?” (Who is the cause of so much happiness?), and are promptly answered by “La Concepcion de Maria!”

For songs and screams by the mob of patrons spew fruit, candy, tupperware, the traditional foods, soap, glassware, autographed copies of a Mary poster limited edition, chewing gum, toys, and noisy, handcrafted instruments. Children wear crowns that suspiciously resemble the feathers of an Indian chief headdress. It goes around and around like a record on the wrong speed. The fireworks boom overhead, and whisps of colorful lights flicker incongruent to the grandeur of the scene.

Remember that we are giving and consuming here. I mean, the streets are packed!

Just before midnight, the neighborhoods have not dwindled in their pluck and energy. (In fact, it is somehow even more alive than before). With this heightened force of fervor and life comes an unspoken need for some giant release.

At the strike of the hour, the gong of the cathedral bells answer this plea for liberation, and the lights and sounds of pyrotechnics emit thanks with fury and passion for longer than I know. 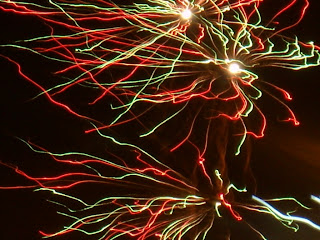 The streets everywhere in a community of 180,000 are filled with smoke, on every corner, and in every barrio. I can taste it, smell it, and feel it burning my eyes. Visionless, there is no longer room to startle. Only to persevere, like the fires and sparks. Whispy and colorful, jousting with the endless night sky.

The people light firecrackers on the streets in every neighborhood, in and amongst traffic and crowds and small children. In no way is this experience OSHA approved. They behave as if this is their very last chance to gain the attention of Our Lady, because they do not stop, against the odds of poverty and the limitations of a developing world. Persistent and hopeful.

Yet it is also never an exorbitant spectacle.

I can not help but think of the United States’ CIA and Marine Corps versus Augusto Cesar Sandino and the campesinos. I mean, I can watch the young man light the spark and throw the rocket and return to the next before reveling in the first. It’s happening on every street corner for miles. This display of faith and passion does not entail mile-long, comet trails via remote-sensing, target acquisitions weapons software. This is not a disney display with synchronized, orchestral, technicolor dreams. This spectacle somehow maintains a powerful intimacy…small, whispy and colorful. But pounding, repetitive, and steady. Invigorating because of its duration and spirit.

I wonder if I can feel something different in the air. Mary, are you listening? Because this all must be ending soon. I mean, the people here have so little.

But for endless moments, the light show does not stop. And the people are staring with their eyes to the sky, and rocking on their porch, and kissing their sweethearts, and thanking Mary for her kindness and love. The dogs on the street only wish for peace to rest their skeleton frames.

I can only thank Mary, for all of Her blessed miracles.

This entry was posted in Leon Nicaragua Culture La Griteria. Bookmark the permalink.